Talk to our IT Support & Solutions Team for Free Assessment.

Originally a training company founded in 1995, Computerbilities quickly turned to Managed IT services and IT support in early 1996 at their customer’s request. Since then, Computerbilities has grown into a full-service IT services company servicing small businesses, local and federal government. Founder and owner Adam Pittman, an Air Force veteran, has worked with local and federal government agencies and with more than 2000 businesses in more than 100 industries, including companies such as Boeing, General Dynamics, and the National Institute of Environmental Health Sciences.

Adam was the recipient of the Businessman of the Year award and received the Secretary of Defense Patriotic Employer Award in 2017, and Computerbilities was named Best of Business Raleigh Business Services in 2013.

Adam Pittman is President of Computerbilities, Inc. and is a veteran Computer Technician and Network Engineer with more than 35 years of experience in the computer industry. Adam has worked with local and federal government agencies and with more than 2000 businesses in more than 100 industries, including companies such as Boeing, General Dynamics and the National Institute of Environmental Health Sciences. In 2006, Adam was the recipient of the Businessman of the Year award and received the Secretary of Defense Patriotic Employer Award in 2017. Computerbilities was named Best of Business Raleigh Business Services in 2013. In his spare time, Adam is passionate about Sailing and has sailed the British and U. S. Virgin Islands more than a dozen times.

Rebecca Pearce our Marketing Coordinator joined Computerbilities May 2019. Rebecca has a Bachelor of Arts in English with a minor in Information Systems from the University of North Carolina at Greensboro. She has a great background in marketing, website design, PR and even knowledge of cyber security practices through her Information Systems minor! She discovered her love for marketing while working through several internships in college and during her time taking a business class abroad in Belgium. Rebecca was born and raised in the small town of Hendersonville, NC located in the Blue Ridge Mountains area. In her free time, she enjoys being outdoors, spending time with friends/family, reading and traveling!

Mark Mahar has been with Computerbilities since 2011. He graduated from ECPI University in Raleigh where he studied IT/Network Security, but his interest in computers started much earlier in his life. Mark grew up watching his mother work on computers for Cisco, and it was watching and helping her with different projects that first sparked his love for technology. Mark has training in all aspects of IT and help desk, such as: hardware replacement, active directory, servers, MS operating systems, routing & switching and cabling. When he isn’t working on computers, Mark loves to travel and spend time with his kids.

Joel Stalcup has been fascinated by computers since the first Apple became available to his family in the early 80’s. During his tenure in the Army, Joel worked with Logistics Clerks that utilized computer, satellite, and network equipment. With the high demand of IT issues in his office, Joel used his personal knowledge and the direction from the S6 communication IT support to resolve small network problems, mass software installation and upgrades, and printer issues. Due to injuries, Joel was medically retired from the Army after serving ten years’ active duty. After deciding to go to college for Information Technology Industry, Joel attended ITT Technical Institution in Durham, NC and received an Associate Degree in Network System Administrator. Currently he is pursuing additional Information Security education. In the summer of 2016 Joel began working at Computerbilities as a Network Engineer and Help Desk Support. Joel is married to Kristina Anzaldua-Stalcup, who is his support system and best friend and the father of five beautiful and intelligent children, three sons and two daughters.

Chase Pittman joined Computerbilities in January 2018 as a Computer Support Technician. Chase was previously employed with Bon Appetit as a Chef for the SAS main campus in Cary, NC. He found himself wanting more of a career and took the opportunity to get into the IT Industry as a Computer Support Technician. Chase is now successfully continuing his education with CompTIA certifications and will continue to educate himself with other IT certifications as his career progresses. When not working, he has a passion for music and art and mechanically modifying vehicles. Chase is eager to advance his IT career and provide quality services for the Computerbilities client base.

Nitish joined us in April 2021 as a Network Engineer. Nitish was brought up in Chandigarh, India but is originally from Uttarakhand, India. He previously worked as a System Administrator for SankalpIT and Technospecs Technologies and provided remote technical support to the US, UK, Australia MSPs. Nitish has experience with Backup, Antivirus, and RMM Technologies. He has a strong engineering background in Information Technologies and enjoys technical challenges while enhancing his knowledge to the next level. In his spare time, Nitish enjoys fitness and traveling (especially to the Himalayas mountains). A fun fact about Nitish is that he likes to listen to Romantic Songs and watching Web Series Thriller Movies. One of his favorites being “Money Heist.”

Not Ready To Call Us Just Yet

If so, we would at least like to send you a copy of our recently published report, “21 Critical Questions Every Engineering Or Construction Company Should Ask Their IT Company Before Signing A Contract For Support”.

This report will arm you with insider information and critical questions you should ask any IT consultant BEFORE giving them access to your computer network.

Simply fill out the form here and we’ll send you a copy today! 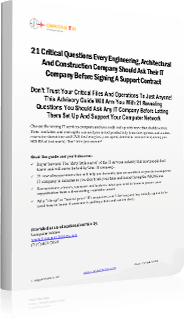